“In China, Your Grace, there is not a single plant that can compare to Ginseng.” — Father Joseph-François Lafitau, scholar & Jesuit missionary, Paris, 1718 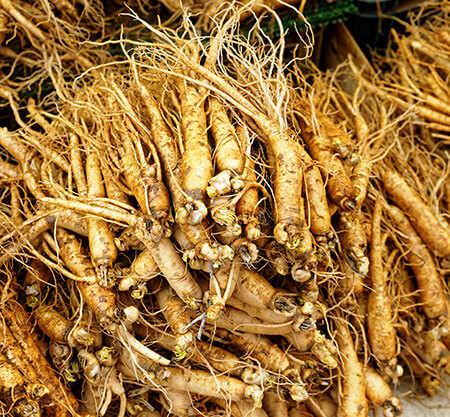 Ginseng (Panax ginseng) or Ren Shen as it is called in traditional Chinese medicine, is one of the most well-known herbs in both Eastern and Western herbal traditions. It has been valued as a therapeutic herb for more than 7,000 years!
The parts of the herb that is used are the roots and the leaves of the plant. The plant grows mainly in forested areas and grows to about one foot in height. The leaves die off each year and the root continues to grow.

The age of a ginseng plant can be told by the number of rings on the neck of the root. According to Traditional Chinese Medicine, the energy of ginseng is sweet, slightly bitter and warming. It affects the spleen, lungs and heart systems as interpreted in this system. It is stimulating in nature and has a long earned reputation for being a rejuvenator of the body.
Herbal Actions – Ginseng is said to have both calming and stimulating constituents within it. Traditionally, herbalists have found that ginseng can be calming, enhance mental clarity, stimulate the nerves and yet instill a sense of well-being. Because of these actions, ginseng is considered an adaptogen. An adaptogenic herb assists the body so that it can more easily adapt to stress, raise energy levels and boost immunity.
Another wonderful effect of ginseng for men is that it can help to stimulate the libido. Sir Jason Winters International utilizes the natural goodness of ginseng in our Golden Lion Supplement, which we have specially formulated for men. This formula was named after an ancient legend from India and China. The people called him “the Golden Lion” because this herbalist and teacher healed and taught many in the villages that he visited, fathered many children, and was vigorous, healthy and strong well into his advanced years.

Treasure of the Emperors
Throughout ancient China’s long dynastic history, Emperors were said to have paid as much as their weight in gold in order to possess the finest and oldest ginseng root. These rulers believed that ginseng would give them wisdom and safeguard their dynasties by ensuring a long and healthy life. Because of this, ginseng’s reputation has endured throughout the world for centuries.

In traditional Chinese medicine (TCM) and within Ayurvedic medicine of India and Unani medicine in Arabia and the Middle East, ginseng has been long considered an invigorating tonic and thought to be one of the greatest secrets for a long life. Perhaps this is because ginseng is especially helpful in improving the body’s ability to cope with stress, fatigue, lack of sleep and extremes in temperature, ginseng is taken by those who have weakened immune systems and the elderly in northern and Central China from middle age onward.

Ginseng’s worldwide reputation was so great during the late 17th and early 18th century that wars were even waged to control the forests in the new world where it grew.

There are a variety of plants worldwide that have been considered forms of ginseng. Below are some examples.

Researchers have recently shown that the substance within ginseng known as ginsenosides. These substances within the various kinds of ginseng have shown an ability to potentially reduce the development of certain types of cancer. These ginsenosides have been shown to stop blood vessels from forming tumors and assists in eliminating the production of these types of abnormal cells within the body that can cause cancer to spread.

As you can see, all of the different ginsengs have a reputation that is well-deserved. As with any herbal supplement, if you are considering giving ginseng a try it’s important to discuss it with your doctor or a trained herbalist first.

“Ginseng: The Divine Root: The Curious History of the Plant that Captivated the World” by David A. Taylor, 2006, Algonquin Books, Chapel Hill, NC