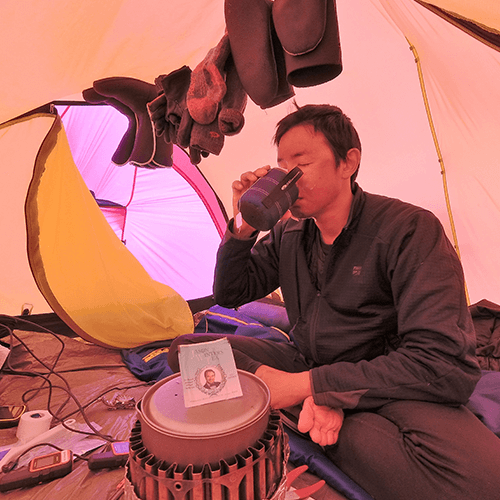 A young Japanese adventurer, Mr. Abe, reached the South Pole by solo trek, after 55 days and 918 km in 2019. Mr. Abe was greatly inspired by the story of Sir Jason Winters, which was a driving factor in his attempt at another solo Antarctic trek at the end of 2021, this time following the same route as Nobu Shirase Party for the first time ever.

Sir Raymond Winters was proud to sponsor Mr. Abe during his expedition. We invite you to read more about Mr. Abe and view pictures and video of his journey which lasted 3 months and over 800 km through Antarctica.

A Professional Adventurer / Explorer – (in his own words).

Born in Akita Prefecture in 1982, North Japan, he has been embarking on adventures all over the world, since he was a student of University of Akita. All of adventures done by his own, for example, he completed 6,400km of “RIKISHA JAPAN TRAVERSE ”, in which he traveled around 68 Ichinomiya Shrines enshrined all over Japan driving Jinrikisha, a Japanese traditional rickshaw. In 2019, he became the first Japanese to walk alone up to the South Pole taking“ Messner Route ”. In 2021, He is endeavoring to achieve another challenge to the South Pole attributing to Nobu Sherase’s 1911 Antarctic route, who also originated from Abe’s hometown Akita.

On the challenge of “Shirase Route”

As one of the climax of my adventure career, I finally have a chance to challenge to walk up to the South Pole alone taking “Shirase Route”, which is my dream from childhood. I feel confident now both physically and mentally to achieve new expedition after the last Antarctic traverse in which I walked up to the South Pole taking “Messner Route” alone as a first Japanese explorer. Although I was sickly and even bullied sometime, I can come to stand this start line by keep training myself. Through the “Shirase Route” challenge, I hope to show everybody that dream comes true and are passed on someone. I am going to stand the South Pole with all of your dreams which push my back to the goal.

The Top 10 Benefits of Drinking Tea