You are here: Home1 / lvstory

Cancer survivor speaks out for ‘alternative’ medicine As appeared in the LAS VEGAS SUN NEWS – November 24, 1999 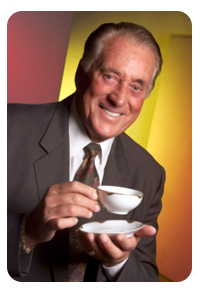 by Jerry Fink
Since surviving what was diagnosed as terminal cancer more than 20 years ago, a British citizen with ties to Las Vegas has traveled the world, urging a marriage between the traditional and alternative medical treatments that he claims saved his life.

“Doctors, the Federal Drug Administration and those who favor natural cures have to work together for the common good,” Sir Jason Winters, who has received a knighthood from the Knights of Malta for his work, said during a recent visit to Southern Nevada.
Publishers of the Healthy & Natural Journal, a magazine based in Sarasota, Fla. and devoted to natural health, say that Winters is an international figure who helped ignite the herbal revolution in the 1970s and 1980s.

But Winters’ message fell on deaf ears in the traditional medical community when he first began selling a line of herbal products that bear his name.

Today, however, with one in three Americans using alternative medical treatments, the American Medical Association, medical schools and physicians are coming around to the 69-year-old Winters’ way of thinking.

A survey that appeared in the Sept. 2, 1998, issue of the Journal of the American Medical Association (JAMA) revealed that 57 percent of family physicians interviewed are willing to recommend alternative medical treatment.

It also noted that more than 75 of the 125 medical schools in this country offer courses in complementary and alternative medicines, including such therapies as herbs, acupuncture, chiropractic and mind-body techniques.

The article in which the survey appeared said there is a growing dissatisfaction with conventional health care “that is perceived as ineffectual, too expensive or too focused on curing disease rather than maintaining good health.”
In response to public demand, the 1998 survey said, the number of required courses in alternative medicines at schools that offer them increased from 46 in 1997 to 63 in 1998 and the number of electives increased from 47 in 1997 to 54 in 1998.
Dr. Tracy Veach, associate dean of Educational Affairs at the University of Nevada, Reno School of Medicine, helped create the first complementary and alternative medical course at his school four years ago.
The elective course may be taken in the fourth year of medical school. It is a two-to-four-week class in which students visit a variety of practitioners of alternative treatments.
Veach said that so many people are seeking alternative medical treatments that medical schools are being pressured to offer courses so doctors will be informed enough to give appropriate advise to their patient.
He added that in many cases, patients who are being treated by alternative clinicians don’t tell their primary care physician, and the treatments by the two professionals may not interact well.
Veach said that doctors in Northern Nevada seem especially keen on learning about alternative treatments. “We’ve had a number of requests from the medical society here to put on programs on complementary and alternative treatments,” he said.
The Internet, Veach said, has become a source of information for everyone looking into alternative medicine, but some of that information is incorrect. For the protection of the patient, Veach noted that it is important for doctors to learn which treatments are effective and which ones are not.

Included in many of the courses taught around the nation are studies of ancient medical treatments that have been part of the Asian and Native American cultures for thousands of years.
It was those cultures, as well as the Bible, that Winters turned to in 1977 when he was told he had 90 days to live.
Winters, whose son, Raymond, lives in Henderson, said that a cancerous tumor had wrapped itself around his carotid artery and became attached to the wall of his jugular vein. He went through traditional treatments, such as radiation therapy, but when he was given his death sentence he began searching for alternative treatments.
He learned about an herb called chaparral that American Indians used to cleanse their blood. He learned about an herb called herbalene that Buddhist monks had used for thousands of years for blood purification. And he learned about red clover, which he said is a blood purifier that was mentioned several times in the Bible.
He made a tea from the three herbs and within weeks, he said, the cancer was gone.
“The herbs did not cure the cancer,” said Winters, who was a movie stuntman at the time he was hit by cancer. “They created a strong antioxidant that purified my blood and allowed my body’s own immune system to take over and heal me.”
Winters’ recovery attracted widespread attention and since then he has spent his time searching for other herbal medicines and alternative treatments — researching folklores from cultures throughout the world.
Winters lives in the Philippines but travels much of the time, looking for herbs in jungles, speaking on behalf of combining traditional and alternative medicines and discussing the long line of herbal products he has developed, called Sir Jason Winters.
He said he is not a scientist and so when he finds an herb or something else worth investigating further, he has people who do that for him.
Winters, who said he quit school at the age of 14, has written several books, published by Vinton Publishing Co. in Las Vegas. The most recent is “The Sir Jason Winters Story.”
His books promote a holistic approach to medical treatment, which includes use of traditional medical care as well as proper diet, exercise and preventative treatments.
“If you are ill, see your doctor immediately,” Winters said. “Tell your doctor that you will do everything that he or she sees fit to help you. But also ask your doctor if is is OK to change your eating habits and use alternative treatments.”

And there are widespread reports of traditional doctors who are looking for alternatives. There is a trend for Western doctors to head back to the classroom to study Eastern theories of health, including herbology and holistic healing.
Los Angeles anesthesiologist Dr. Jim Shellar put his practice aside and enrolled full-time in a Chinese school of medicine to learn acupuncture and Eastern theories on health.
Dr. Ka Kit Hui, director of the Center for East-West Medicine at the University of California, said that Western and Eastern medical disciplines are becoming complementary. “Western medicine sometimes lacked a holistic approach and Chinese medicine in itself might not be adequate alone to treat patients,” Hui said, adding that the medical profession should use Chinese medicine to look at the forest and Western medicine to look at the trees “so we have a better view of the landscape of the human condition.”
UCLA has one of the largest acupuncture training courses for licensed physicians among medical schools in this country. When it began about 10 years ago there were 20 students in the 200-hour program. Today about 600 students enroll each year.
Dr. Douglas Brodie, who operates a cancer clinic in Reno, has advocated alternative and nutritional treatments for decades. But his belief was not always supported by the medical community at large, he said. In fact, he added, because of his stand on medical freedom and alternative treatments, the California Medical Board attempted three times in the 1970s to take his license — and failed.
In 1980 he moved his practice to Nevada, where he has developed new techniques for enhancing the immune systems in cancer patients using a combination of conventional and alternative treatments.
Brodie said that he does not want to “replace or eliminate traditional methods and, in fact, (we) often incorporate such methods into our program. We have found that the various alternate modalities quite consistently complement and enhance most of the conventional treatment programs.”
He published a book in 1987 entitled “Cancer and Common Sense: Combining Science and Nature to Control Cancer.”
Raymond Winters, 40, who heads the company that publishes his father’s books, said his father is not well liked by the more radical groups that fight the FDA and reject traditional medicine.
“They hate the FDA, doctors and drug companies,” Raymond Winters said, “while Dad does not.”