Blog - Latest News
You are here: Home1 / Sir Jason Winters Blog2 / How Much Caffeine Is Too Much?

Look at any health journal or article about caffeinated drinks, and you will see conflicting information about whether caffeine is good or bad for your health. Yet caffeine is one of the most consumed supplements in the world. Most people drink it for the energy boost it gives them in the morning and throughout the day. Some of the more well-known benefits of caffeine are:

According to the U. S. Food and Drug Administration (FDA), caffeine can be a part of a healthy daily diet. Of course, as with anything, it is possible to have too much of a good thing. Consuming too much caffeine can pose some serious health risks. Factors such as body weight, age, pre-existing health conditions, and medications can all play a role in just how much caffeine you can safely consume. So, how much caffeine is too much?

Caffeine is a naturally occurring crystalline chemical compound that is found in a variety of foods, including coffee, tea, chocolate, some nuts, yerba mate (Ilex paraguariensis), and herbs such as kola nut (Cola acuminata & Cola nitida), and guarana (Paullinia cupana). Some manufacturers will also add caffeine to their products. Caffeine, known by its scientific name of 1,3,7 trimethylxanthine, is found within foods and even medications to help ease pain and activate the other chemical constituents in drugs.

Caffeine affects the central nervous system and is considered a stimulant and a psychoactive compound. Despite its stimulating effects, caffeine is not regarded as addictive. Scientists have found that caffeine will affect the body when there are more than 15 milligrams per liter in the bloodstream.

What Is a Safe Dose of Caffeine? 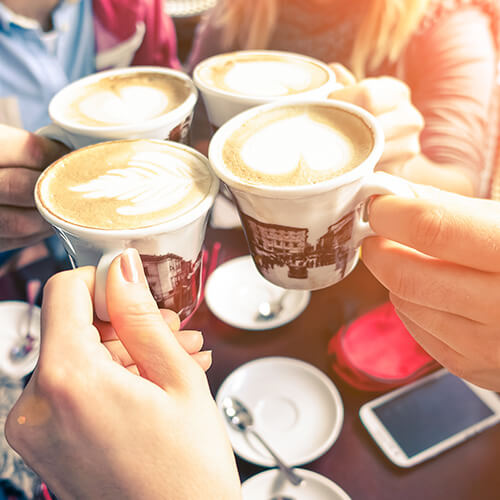 The American Association of Pediatrics (AAP) recommends that caffeine in children be limited as much as possible, and adolescents should not consume more than 100 milligrams of caffeine per day. Because children cannot properly process caffeine in the way that adults can, parents need to watch what their children are consuming in terms of sodas or energy drinks. Even nursing mothers are advised to limit their caffeine intake because it can go directly to their babies via breast milk.

What Are the Side Effects of Caffeine?

Some side effects of caffeine include:

If the side effects are mild, they will usually subside within 3–5 hours. Further precautions to take include:

Is a Caffeine Overdose Possible?

Caffeine overdoses in healthy adults are rare. However, it is possible to overdose on caffeine. There are caffeine supplements available on the marketplace. It is far more likely for someone to suffer a caffeine overdose by taking these types of supplements rather than from drinking too much tea or coffee.

Unlike drinking caffeinated beverages, these supplements contain a purified, much higher concentration of caffeine. The FDA estimates that a single teaspoon of powdered caffeine contains the equivalent of 28 cups of coffee!

Some symptoms associated with having had too much caffeine are:

Anyone who experiences these symptoms should see a doctor or healthcare professional immediately. A caffeine overdose may require treatment such as intravenous fluids or other treatments that only a doctor can administer.

Those who have died from caffeine overdose generally suffer ventricular fibrillation. This happens when the lower chambers of the heart muscle don’t fully contract. When the heart doesn’t contract fully, the heart stops beating normally and triggers cardiac arrest.

Who Should Avoid Caffeine?

Caffeine overdoses happen far more often in children and those with pre-existing health conditions or who are taking medications that can cause severe side effects. You should avoid consuming caffeine if:

Know What’s In Your Cup

According to the Mayo Clinic, here is the breakdown of the average amount of caffeine in coffee, tea, sodas, energy drinks, and chocolate. These stats use an 8 oz. standard, the same size as a normal cup of tea. 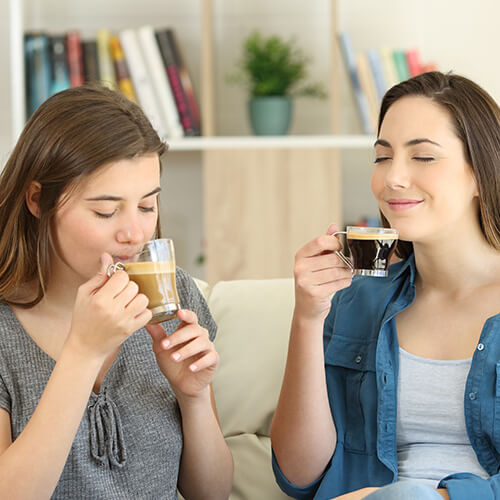 It’s rare to find a 8 ounce serving of soft drinks, so these caffeine amounts are a little low for the standard can of coke, which has anywhere from 33-38 grams of caffeine per can. Plus, energy drinks usually come in a 16 oz. can, pushing each one of those to over 140 mg of caffeine each!

On top of that, both soft drinks and energy drinks often contain sugar or sugar substitutes for flavor, both of which cause health issues over time like obesity. Artificial sweeteners can cause a lot of damage to your brain and metabolism.

In some of our earlier blog posts, we talked about whether tea or coffee is better for you. While coffee remains very popular in the U.S., tea is by far more popular around the world.

One reason for tea’s popularity is that while tea typically contains fewer caffeine alkaloids than coffee, the effect of increased alertness is gentler and, according to several scientific studies, lasts longer.

Other added benefits include the potential to lower blood pressure and free radical reduction through antioxidants. These are good reasons to consume tea or coffee as a part of their healthy daily diet. If your daily cup of Joe is proving too much and making you feel edgy, consider transitioning from coffee to tea.

Disclaimer: Please note that all information provided on this blog is not intended to recommend, diagnose, treat, cure or prevent any medical condition or to replace the advice of a qualified doctor or other healthcare professional. Before consuming tea or any other natural health supplement, consult your doctor.

Commissioner, Office of the FDA. “Spilling the Beans: How Much Caffeine Is Too Much?” U.S. Food and Drug Administration. FDA. Web. 30 May 2022.