As colder weather is now on the horizon, so is cold and flu season. Coming down with a cold or flu can put you out of commission for a few days to a couple of weeks – or it can linger for even longer if you don’t allow yourself adequate rest and recovery time.
The good news is that there are ways that you can boost your body’s own natural immune system in order to stay well. Your immune system is your first line of defense against colds, flu and other illnesses, including cancer.

Of course, here at Sir Jason Winters International, we do recommend that you listen to your doctor if he/she suggests getting your yearly flu shot as a first defense. But there are other things you can do to help prop up your immune system with herbal teas. Here’s what you need to know to help defend yourself against cold and flu this season.

Boosting Your Immunity with the Power of Tea 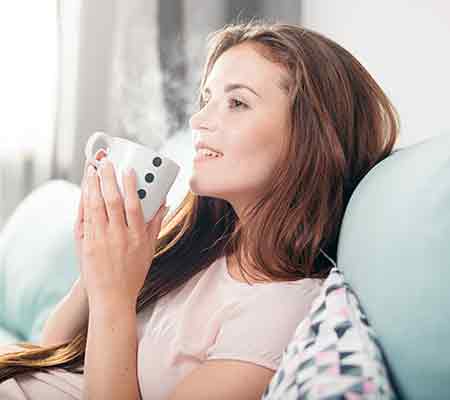 Cold and flu are both caused by viruses. Once you come into contact with these viruses which can be airborne, they replicate within the body. As your body tries to fight them, you get all those icky symptoms. Herbalists and naturopathic doctors have long known that it is important to boost the body’s defenses first before a disease can take hold.

Winter often brings stresses that lower the body’s natural defenses and vitality, but herbal teas can help with this. When you start to feel as if you may be coming down with something, a bit of hot herbal tea along with a bit of lemon and honey can be just what the doctor ordered. Hot liquids can help relax you, ease sore and aching muscles and warm you on the inside.

Here are some of the ways that you can use the power of tea to help boost your immune system during the cold winter months or any time of the year.

One wonderful way to do this is by drinking and enjoying tea every day.

Since ancient times, both green and black tea (Camellia sinensis) has been used within the healing system of Traditional Chinese Medicine (TCM) and Ayurveda from India. Green tea is an overall good health as a tonic for the heart, digestive tract and can lower incidence of diabetes and liver disease. Modern researchers have also found that there is evidence that it may even help the body to resist some forms of cancer through its strong antioxidant properties. These antioxidant compounds, also known as polyphenols, are found to be at their highest concentrations within green tea.

Traditionally, this herb has been used around the world as an excellent beverage for those suffering from colds or flu. Red clover is one of the chief ingredients that Sir Jason Winters himself found that helped in his own recovery from cancer and it is included in our Sir Jason Winters herbal formulas. Red clover, known by its botanical name of Trifolium pratense, can reduce inflammation in the body, help the body to effectively eliminate toxins, assist heart and lung function and has to trace antibiotic properties.

Used by indigenous tribes in the Southwest United States and throughout Mexico, Chaparral (Larrea tridentata) has shown itself to be effective in addressing colds, flu, and respiratory infection. Also known as Creosote Bush, chaparral is an excellent blood purifier and has pain relieving properties that can help when you ache all over. Sir Jason Winters found that chaparral was instrumental in treating his own illnesses. This herb has been included in Sir Jason Winters Classic Herbal Tea with Chaparral.

Cinnamon is another herb that has a long history of being used as a means to treat colds and flu. In 2012, the Journal of Traditional and Complementary Medicine released a report citing cinnamon, known as ròu guì in traditional Chinese medicine, as being one of the most important herbs. It is considered an antioxidant, antiviral, antifungal, and is known to lower cholesterol through its tonifying and warming properties. We understand the goodness of cinnamon and have included it in our in our Sir Jason Winters’ Pre-Brewed Tea with Cinnamon and Stevia in loose leaf form so you can enjoy it any time you wish! 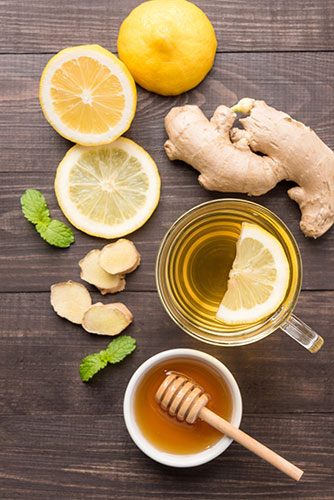 Almost everyone has heard that eating foods and drinking high in Vitamin C can help boost immunity. Vitamin C can also help you to feel better if you do happen to come down with something. Some choose to take a daily Vitamin C supplement. When brewing a cup of tea, one of the best ways to get your Vitamin C is by adding lemon. Lemon can increase levels of Vitamin C and assist in strengthen the immune system and assist in helping to fight off colds and flu by helping to speed the healing process.

Like many other herbs from the East, slicing a bit of ginger (Zingiber officinale) and brewing it with your tea. Whenever you are suffering from a bout of nausea, stomach upset or indigestion, ginger is one of the most effective herbs you will find. Ginger has anti-inflammatory, antibacterial, antiviral and cough suppressing properties. It can also help to induce sweating – so if you are suffering from a fever, ginger may be a way to help you to break it.

The Ancient Egyptians knew of the wonderful healing properties of pure raw honey. When you brew your cup of tea and sweeten it to taste with honey, you are taking advantage of its antioxidant, antiviral properties to fight against what ails you. Honey has a unique way of easing sore throat pain and will boost your immune system and reduce the severity of cold or flu.
You can make a gargling solution of green tea and honey to ease sore throat pain. Brew your cup of tea as you normally would and add a teaspoon of honey to the tea. Allow it to cool to room temperature then gargle with it as needed.

Many tea drinkers of Sir Jason Winters’ teas enjoy regularly adding both lemon and honey to their tea. This doesn’t just make them tastier, but can help improve the potential health benefits of the tea. As cold and flu season comes on us, stock up on some of the teas we’ve mentioned and made them part of your routine. You just might dodge the flu bullet.

The Goodness of Ginseng

Cooking with Tea
Scroll to top