Almost everyone struggles with insomnia from time to time. The ability to get a good night’s sleep not only determines how you feel the next day, but can also affect your overall good health. Too little sleep for too long can cause serious health issues!

One of the best herbs to both invigorate and relax since ancient times is found in most kitchen spice cabinets. Sage (Salvia officinalis), also known as common or garden sage, is a perennial plant that grows easily in almost any climate. The botanical name Salvia comes from the Latin word salvare, which means to be well, to be protected, or to be healthy.

Sage grows to be about 1 foot tall and produces white, pink, or most commonly, lavender-colored flowers in the mid to late summer. It loves sunny areas and can survive the winter if properly covered and mulched. The oblong leaves have a rather bumpy texture that appears almost hairy. The aromatic properties of sage are peppery, camphorous, and most refreshing. 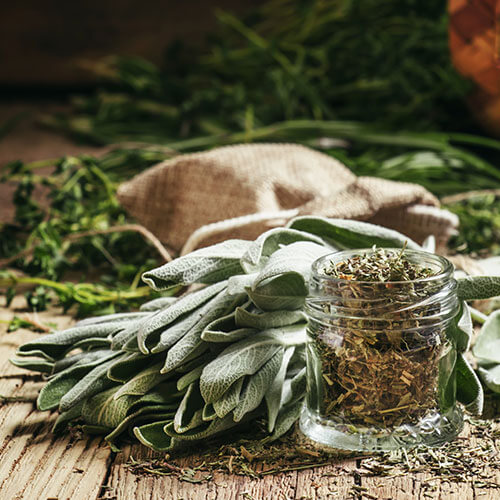 A Short History of Sage

The herb quickly spread in popularity within the ancient world and ended up in the monastery gardens in Europe. Later, traders spread this species of sage to the New World and found that the Indigenous Native Americans were using their own native species of sage.

During the Eighteenth Century, Chinese traders preferred the sage that grew in Europe became a part of the tea trade when Dutch traders discovered the Chinese preferred European Sage to their own native species. It became such a commodity that Chinese traders were willing to part with their own choicest teas in exchange for this herb.

Today, sage is readily available as a spice in stores and commonly grown as a must-have herb in gardens everywhere.

Sage is loaded with Vitamins A, B1, B2, B3, C, and E. This plant also is loaded with minerals such as calcium, iron, magnesium, and potassium. Sage also contains tannins and several powerful antioxidants such as flavonoids, camphor, rosmarinic acid, and thujone. The herb has both antiseptic and astringent qualities that, according to traditional herbalists, contain phytoestrogens that can balance out hormones and may be beneficial for women in particular.

The properties in the sage plant also can help boost memory and bring relaxation. Sage tea has shown itself to be an excellent tonic that gives a sense of relaxed awareness. It has shown itself to work particularly well as a brain tonic and assists in overall cognitive function. Scientists are investigating it as a potential treatment for certain forms of Alzheimer’s disease.

Some Traditional Uses of Sage Tea

Ancient humans have had millennia to learn about the properties of herbs like sage. Here are some ways that sage tea has been used.

When we get a good night’s sleep, we feel better and more revitalized. During times of stress, getting at least 6 – 8 hours of uninterrupted sleep is essential to keep our bodies and our minds healthy. Drinking sage tea can help to accomplish this.

As you can see, there are many reasons why sage is regarded as an important herbal ally.

In his many travels, Sir Jason Winters learned from healers from around the world about the many potential health benefits of sage (Salvia officinalis),. He added it along with Red Clover and our special spice blend known as Herbalene to our Classic Blend Herbal Tea with Sage. 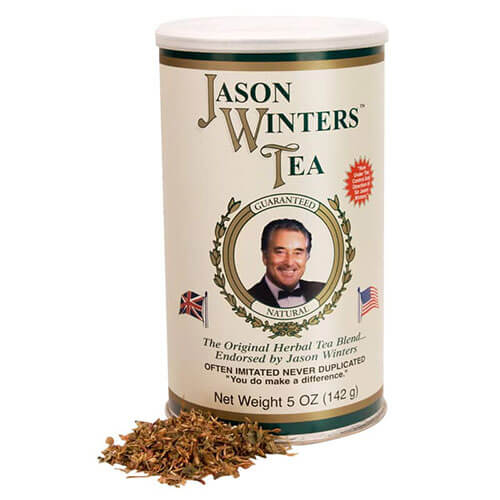 You can enjoy this tea any time of day, with meals and before bedtime. Just add boiling water to two teaspoons of the tea and let steep for 15 minutes. This tea is already delicious, but you can add your favorite natural sweetener such as honey, agave, or stevia to taste. During the summer, our Classic Blend Herbal Tea with Sage also makes an excellent sun tea.

This blend is our most popular tea. Right now, our 5-ounce canister, which is regularly priced at $29.95, is now just $24.95. Or if you are on the go, we also have this Original Blend Tea Bags with Sage available in a box of 20 tea bags. Regularly priced at $16.96 per box, we are offering considerable savings to our customers for just $11.95 per box.

If you want even more savings, why not take advantage of our convenient monthly or bi-weekly subscription service and save an additional 5%? Subscribing will ensure you get the best price and will always have our products delivered directly and safely to your door.

Try Some Tasty Tea Marinades for your Next Meal

Green Tea’s Benefits for Your Skin
Scroll to top