Tea is one of the most versatile drinks you can find anywhere. James Norwood Pratt author of “The New Tea Lover’s Treasury, advises “If you are cold, tea will warm you. If you are warm, tea will cool you. If you’re excited, it will soothe you. If you are lethargic, it will stimulate you.” During the summer months drinking cold iced tea has long been a preferred way to quench heat and thirst. 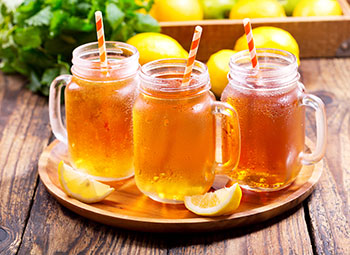 It is interesting to note that iced tea as a summertime beverage really didn’t become popular in the United States until 1904 where it made its debut at the World’s Fair. During the fair, tea plantation owner, Richard Blechynden, wanted to introduce fairgoers to his tea by giving away samples. Because the weather that particular summer was both hot and humid, no one wanted anything hot to drink.

Blechynden discovered that by simply adding ice to his brewed tea, he could change all of that. People flocked to his exhibit to try iced tea. The newly “invented” iced tea became such a sensation that summer that those in attendance at the World’s Fair consumed approximately 880 gallons! Since its debut in the early days of the 20th Century, iced tea has become the go-to drink every summer.

In a previous article, we discussed some of the benefits of both hot and cold tea and which is better tasting and better for you. For some, taste is directly related to temperature. Drinking iced tea can make it more difficult for our taste buds to determine the subtle aromas and flavors in the way that they do when tea is served hot. By adding lemon, mint or fruit, or natural sweeteners like honey or stevia, the taste of cold tea can be enhanced and made tasty in even more ways than when served hot.

Here are some refreshing and delicious ideas to incorporate into your Sir Jason Winters teas to make a cold summertime drink that’s sure to hit the spot on a hot day! 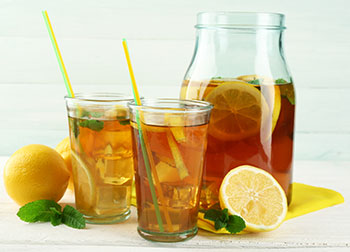 Many people choose to use the power of the sun to brew their summertime teas. Most of our Sir Jason Winters International teas can be used to make sun tea. You will need a gallon glass jar with a lid. Fill the jar with filtered water, add 8 -10 tea bags, put the lid on the jar and let the tea steep in a sunny spot for 3-5 hours or until it reaches the desired strength. Remove the tea bags and pour over ice, or refrigerate. You may also wish to add lemon or sweeten your tea with honey or stevia. Having a batch of your cold tea already made and on hand makes the days of summer super easy. 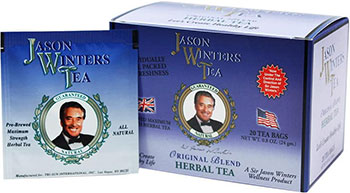 A delicious way to sail into summer is by using Sir Jason Winters Original Formula Tea with Sage. Our blend of Red Clover, Indian Sage, and Herbalene provides a healthful and delicious drink when poured over ice. You only need two teaspoons per pint of our loose tea or one tea bag per pint. Brew hot and let cool or use it as a sun tea. Add freshly picked sage leaves from the garden, some honey or stevia to sweeten and pour over ice as a better alternative to sugary soft drinks during the summer months or any time of year! 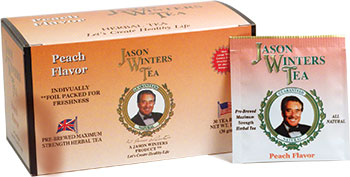 One of the most beloved summertime fruits is peach. There is just something special about the aromatic sweetness of peach when it’s paired with ice and the cool taste of mint.
Simply brew a cup of Sir Jason Winters Peach Flavored Tea and pour it over a tall glass of ice. Whether you choose either the sweetened or unsweetened peach tea, garnish it with mint leaves, some fresh slices of peach, and you can make this easy drink extraordinary. You can add spice to this tea by adding some freshly peeled slices of ginger root. For a relaxing version to help you wind down after a long day, add a sprig of lavender or chamomile flowers to your tea. 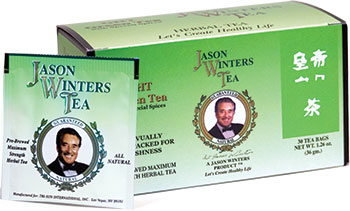 Green tea is packed with lots of health benefits, including antioxidants. Our Sir Jason Winters Green Herbal Tea is created from Chao Phraya green tea leaves, red clover tops, Indian Sage Leaf and our special spice, Herbalene®. Simply brew a cup to taste, then pour over approximately 2 cups of crushed ice, a handful of bruised mint leaves. Add a slice of lime and honey or stevia to taste, and you’ll have the perfect hot weather pick-me-up! For a creamy version of this tea, add some half-and-half to your tea and turn it into a cooling latte. 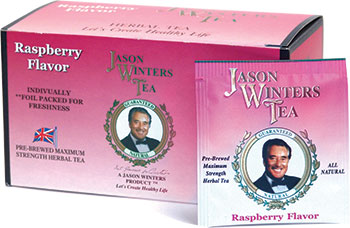 Another favorite summertime fruit is raspberries. Brew a cup or even a pot of our Sir Jason Winters Raspberry Flavored Tea, or our Sir Jason Winters Raspberry Flavored Tea with Stevia. In a glass, muddle some fresh raspberries by crushing the fruit and a little bit of sugar on the bottom. Add approximately 2 cups of cubed or crushed ice and add the raspberry tea and further sweeten to taste. Add some freshly picked, bruised mint leaves and maybe even a cinnamon stick to make the raspberry flavor really come through. You may also consider adding a bit of milk or half and half, some blueberries or strawberries as well and turn your iced tea into a cooling dessert drink.

When it comes to iced tea, the possibilities are almost endless. After trying some of these summertime ice tea recipes, you may even decide to create some of your own. If you do, be sure to drop us a note and share them with us!

Tea Traditions Around the World

The Fascinating History of Tea
Scroll to top